When you were young, you thought the great walls of Barrow Keep would keep you safe. But now you're coming of age, and you realize how many troubles have been inside these walls all along: duplicitous courtiers, treacherous kin, and puritanical heresy-hunters. How will you protect yourself and your friends?

Barrow Keep is a low-prep, old-school setting driven by playbooks and adaptable, easy-to-run scenarios. You play the young residents of the Keep, coming of age while dealing with mysteries, treacheries, and intrigues.

Want a print copy? You can buy them from Spear Witch, Exalted Funeral, or The Twenty Sided Store in the US.

Based on the 24XX SRD from Pretendo Games,  there's now a free, standalone Barrow Keep  playkit with all the rules you need to play! If you've been hoping there would be some simple, standalone rules for Barrow Keep, you can find them on that Itch page. They're currently still in playtest format, but you can grab them (along with the two sample adventures) for free. The beta playkit includes six playbooks and rules for using them in play, as well as the two sample adventures.

In order to download this game you must purchase it at or above the minimum price of $9 USD. You will get access to the following files:

Support this game at or above a special price point to receive something exclusive.

When you buy the PDF at $14 or more, you add 2 copies of Barrow Keep: Den of Spies to the pool of community copies.

It´s a great fanzine! It's just a bit unfortunate that not all characters from the Bestiary have been converted for Troika! In any case, a promising work.

Thanks - that’s a good point. I’m going to set aside a little time to work on that in Jan.

Barrow Keep is an interesting setting that I may or may not play and kitbash sometime in the future. 5/5 Stars.

It's 72 pages, with two 54 page conversion packs. The packs available are for both the Oldshool Eessentials and Sharp Swords & Sinister Spells engines, and the core book (called Den Of Spies) also feels easy to adapt to just about anything else in the classic tabletop style.

There's no art in the packs, but the art in the core book is lovely and detailed and expressive. It's old-school black and white fantasy art, and it's intensely well executed and adds a lot of character to the setting.

Structurally, Barrow Keep is quite interesting in that it doesn't approach the game world like a sandbox but like notes for a novel. For example, the first thing you do when you crack it open is decide the names and identities of several story-pivotal characters. *Then* you get some information on the titular keep.

If that sounds weird to you, I don't think it's mechanically different from stuff Ravenloft was doing ages ago, but by being the first thing you run into it kind of reminds you to approach this book in a different way.

Barrow Keep isn't Lord Of The Rings. It's the opening acts of Golden Compass and Song Of Ice And Fire, or else it's Gormenghast or Galen Beknighted or Sleepless.

Playing into that, Barrow Keep consists of a number of locations---not physically mapped out, but explained contextually. Each of those locations comes with a list of sensory impressions about that space. You're supposed to play up what these spots look like at peace.

The list of important NPCs the book provides is less detailed, but it's fairly long. There's a lot of faces you can run into, and they all have clear characterizations.

While there are some new items, types of magic, weapons, and other mechanical bits included in the book, its real meat is the keep's secrets. The second half of the book is adventures, hooks, factions, maps, and a whole host of ways for youngsters living in or near the keep to get into trouble.

It's fun and engaging and everything's well written, and I think my biggest hurdle as a reader was simply putting aside my preconceptions that old-school means a bunch of grim 30-year-old freelancers getting shanked by skeletons in an unfamiliar land. Barrow Keep *is* adventurous, and there's plenty of genuine danger, but the tone is warmer and more home-like. This change in tone is its best attribute, and it shines.

Overall, I'd recommend Barrow Keep to new and old groups, to young and old players, and to anyone who likes playing character-focused games that stay put. If you want grim and forbidding, this isn't really that (although you could tweak the tone to be more gothic.) If you want to play a fantasy coming-of-age story where you genuinely like all of the characters, and where the focus is sort of on getting into adventure and learning the scope of the world for the first time, this *is* that, and you should snatch it up.

is it possible to buy a printed version of this?

Thanks for asking! I've got print versions going out to most Kickstarter backers in November. I'll probably set up a print purchase level in October when those are closer to going out so others can preorder and jump on that. Once those are out, I'll probably set this up with a PoD service.

Note, the print copy will just be the rules and setting information (which hasn't come out in playtest form yet). I won't be doing print versions of the playbooks and scenario packs for this round since they won't fit the scope of my fulfillment budget.

pity. well anyway, please ping me once this is out

Hey Valamart: I've not got print copies on sale from Spear Witch in the US. I'll be working on getting UK and Canadian distribution once the KS backers in those locations have their copies.

thank you! i made an order 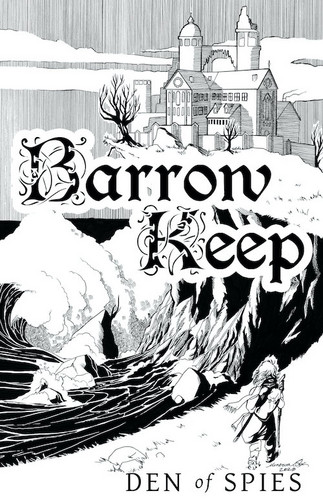